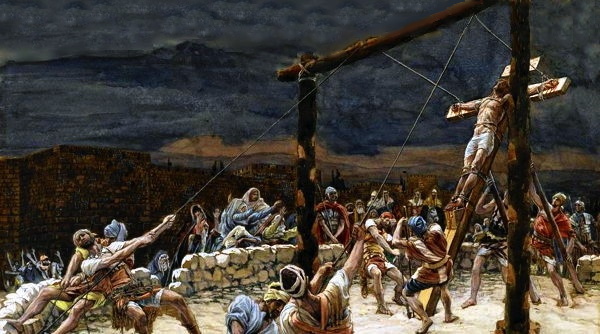 The one symbol most often identified with Jesus and his Church is the cross. Today we celebrate The Exaltation of the Holy Cross. The cross is a sign of suffering, a sign of human cruelty at its worst. But by Christ’s love shown in the Paschal Mystery, it has become the sign of triumph and victory, the sign of God, who is love itself. Pope Benedict XVI wrote:

In one respect the cross does have a terrible aspect that we ought not to remove... To see that the purest of men, who was more than a man, was executed in such a grisly way can make us frightened of ourselves. But we also need to be frightened of ourselves and out of our self-complacency. Here, I think, Luther was right when he said that man must first be frightened of himself so that he can then find the right way. However, the cross doesn't stop at being a horror... because the one who looks down on us from the cross is not a failure, a desperate man, not one of the horrible victims of humanity. For this crucified man says something different from Spartacus and his failed adherents, because, after all, what looks down at us from the cross is a goodness that enables a new beginning in the midst of life's horror. (Salt of the Earth: The Church at the End of the Millennium)

As my friend, Gil Bailie surmises that if you or I were on the cross, looking down at our persecutors, we would have seen ravenous wolves. Jesus looks down and see lost sheep. In this difference of looks we have either the apparent peace we grasp at by expelling our enemies versus the look of Real Truth and Goodness revealed through the grace of His Peace. Pope Benedict XVI continues:

Peace convicts us of our lies. It brings us out of our comfortable indifference into the struggle and pain of the truth. And it is only thus that true peace can come into being, in place of the apparent peace, beneath which lie the hidden hypocrisy and all kinds of conflict. Truth is worth pain and even conflict. I may not just accept a lie in order to have quiet. For it is not the first duty of a citizen, or of a Christian, to seek quiet; but rather it is that standing fast by what is noble and great, which is what Christ has given us and which can reach as far as suffering, as far as a struggle that ends in martyrdom - and exactly in that way of peace. Christ embodies the great and undiluted loving-kindness of God. He comes to help us bear the load. He does not do this simply by taking away from us the pain of being human; that remains heavy enough. But we are no longer carrying it on our own; he is carrying it with us. Christ has nothing to do with comfort, with banality, yet we find in him that inner calm that comes from knowing that we are being supported by an ultimate kindness and an ultimate security. We see that the entire structure of the message of Jesus is full of tension; it is an enormous challenge. Its nature is such that it always has to do with the Cross. Anyone who is not ready to get burned, who is not at least willing for it to happen, will not come near. But we can always be sure that it is there that we will meet true loving-kindness, which helps us, which accepts us - and which does not merely mean well toward us, but which will in fact ensure that all things go well with us. Quote from: God and the World: A Conversation With Peter Seewald

Posted by David Nybakke at 10:09 AM No comments: