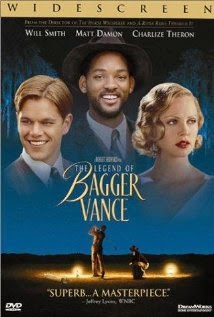 One of my favorite movies is The Legend of Bagger Vance. I know the theology or spirit of the movie followed a loose thread, as one reviewer said, golf was played a foot from Alice's looking glass, however I found numerous scenes memorable and worthy of contemplation.

I do not play golf and yet, like Robert Redford said in making this movie, the game of golf makes for a great metaphor for life. So like this movie, as any good spiritual or mystical movie, it challenges us on many different levels. In this post I wish to draw out an aspect of being human that is often overlooked.

A very brief story-line: A down-and-out golfer, Rannulph Junuh (Matt Damon), attempts to recover his game and his life after returning from World War I. With the help of a mystical caddie, Bagger Vance (Will Smith) he eventually returns to the game, but has no enthusiasm for the sport or life. Bagger helps Junuh find his way back to both.

To set the scene for this clip, the stubborn and frustrated Junuh, after being humiliated in the first round, finally decides to listen to Bagger:


Fix your eyes on Bobby Jones... Look at his practice swing, almost like he's searchin for something... Then he finds it... Watch how he settle hisself right into the middle of it, ... feel that focus... He got a lot of shots he could choose from... Duffs and tops and skulls, there's only one shot that's in perfect harmony with the field... One shot that's his, authentic shot, and that shot is gonna choose him... There's a perfect shot out there tryin' to find each and every one of us... All we got to do is get ourselves out of its way, to let it choose us... Can't see that flag as some dragon you got to slay... You got to look with soft eyes... See the place where the tides and the seasons and the turnin' of the Earth, all come together... where everything that is, becomes one... You got to seek that place with your soul Junuh... Seek it with your hands don't think about it... Feel it... Your hands is wiser than your head ever gonna be... Now I can't take you there Junuh... Just hopes I can help you find a way... Just you... that ball... that flag... and all you are... seek it with your hands.

If you can put yourself in the scene, close your eyes, breathe and surrender to the 'focus' which Bagger seems to be engaging us ... to sense a feeling of being formed, as if being invited into a process of formation. Can you slip out of your head and allow yourself to be "in your body" in this way of being formed?

In the movie, Bagger, by way of a model, Bobby Jones, is getting Junuh to sense a spirit which, as with Jones, chooses him ... chooses us. It is our task to open up to this "authentic" spirit allowing it to indwell in us - to transform us - to drive out all the noise and distractions of our past and culture to bring us to a new birth...

This is why we often feel our human condition is caught up with the many voices in our heads - reeling in and out of various disguises, distractions and noises. It is why we are restless. Bagger goes on to tell Junuh that each one of us has "something that's ours and ours alone. Something that can't be learned... something that's got to be remembered."

... something that's got to be remembered... Contemplating on this draws me right back into the Eucharist and Jesus saying to each of us, "Do this in remembrance of me." (Lk 22;19) What is it about memory?

Like Bagger says, the Real or Authentic Other chooses us - (in)forms us just like in Isaiah 64:7, "Yet, LORD, you are our father; we are the clay and you, our potter: we are all the work of your hand." And John 15:16, "It was not you who chose me, but I who chose you and appointed you to go and bear fruit..." This bedrock of faith - of being part of and formed by and chosen by Something Greater than the social-cultural other is our entrance into becoming this new creation not run by the social-cultural other but by the Indwelling Spirit of God.

The three-year-old said to the newborn:

"Tell me what God is like, cause I'm starting to forget."

Going back and using the metaphor of golf, Bagger repeats that there is "somethin' we was born with... Somethin' that's ours and ours alone... Somethin' that can't be taught to ya or learned... Somethin' that got to be remembered... Over time the world can, rob us of that swing... It get buried inside us under all our wouldas and couldas and shouldas... Some folk even forget what their swing was like."

There is a deep and authentic connection to God that we are seeking and to find that we must finally get out of the way, get out of our heads so to seek that place in our soul, so to hear being chosen by God. This ... this 'surrendering' ... this 'obedience' ... this 'letting go' is needed to counter our human condition that the world buries us under causing us to stumble and forget that we were made to receive ourselves through God, and allowing His Indwelling Spirit to form us into His Instruments spreading love and forgiveness to others.

So the question is: Which other are we being guided by?

In Part 2 (link here) I wish to explore memory and how it can help us come out of the shadow.
Posted by David Nybakke at 9:14 AM