Rhythm, routine and ritual - the ingredients for staying alive 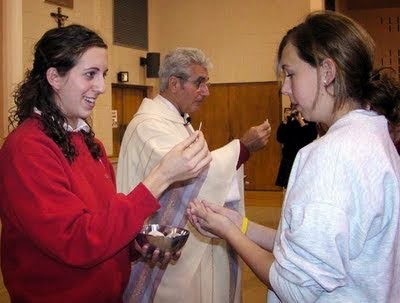 A friend of mine, an alcoholic in recovery, likes to explain the dynamics of an Alcoholics Anonymous meeting this way: “It’s funny, the meetings are always the same, the exact same things get said over and over again. Everything is totally predictable; everyone, except those who are there for the first time, know already what will be said. And we’re not there to show our best sides to each other. I don’t go to an Alcoholics Anonymous meetings to share my talents or to be a nice guy. No. I go because, if I don’t, I know, and know for sure, that I will start drinking again and eventually destroy myself. It’s that simple. I go there to stay alive!”
In a curious, but accurate way, that can also be a description of the Eucharist, at least of one important aspect of it. Among other reasons, we go to the Eucharist to stay alive. The Eucharist is meant to be God’s regular nourishment for us, daily manna to keep us alive within the desert of our lives.
We get this theology from John’s gospel. The gospels, as we know, do not have just one theology of the Eucharist. The various communities in the early church each emphasized different things about the Eucharist. John, unlike the other evangelists, does not set the Eucharist so saliently into the context of the last supper. He does set it there, but places it in another context as well.
In John’s gospel, where the other gospels have the institution of the Eucharist at the last supper, he has Jesus washing the disciples’ feet. Various scholars, Raymond Brown among them, suggest that John does this because, by the time his gospel was written, perhaps sixty to seventy years after Jesus died, Christians, not unlike today, were already arguing with each other about the Eucharist: How often should it be celebrated? Who should preside? What is its precise meaning? John, in placing the washing of the feet where the other evangelists put the words of institution, is reminding us that washing each other’s feet, service to and humility before each other, is what the Eucharist is really all about. But John also emphasizes another aspect of Eucharist.
While linking the Eucharist to the last supper and highlighting that it means service and humility, John also places it into Jesus’ discourse on the bread of life. In Chapter six of his gospel, Jesus says: “Unless you eat the bread of life, you will not have life within you.” In speaking of the bread of life, he links it to the manna, the daily feeding that Israel received from God during her years in the desert. For all those years, manna was Israel’s daily food and, often times, her only food. It had too a curious quality. When she ate it alongside other foods she had procured for herself or food she had brought out of Egypt, it tasted bitter, but if she took manna as her only food it tasted sweet. In either case, it was her daily sustenance.
In John’s gospel, Jesus tells us that the Eucharist is the new manna, the new bread from heaven, the new way that God gives us daily sustenance. The Roman Catholic practice of daily Eucharist takes its root here. That is why too, in Roman Catholic spirituality, unlike much of Protestantism, the Eucharist has not been called “the Lord’s Supper”, since it was understood not as an extraordinary ritual to commemorate the last supper, but as a ordinary, ideally daily, ritual to give us sustenance from God.
How does the Eucharist give us daily sustenance? As we saw in the earlier columns in this series, the Eucharist nurtures us by giving us God’s physical embrace (“the real presence”) and, like a Quaker-silence, it gives us a oneness with each other that we cannot give to ourselves. However it nurtures us in yet a further way. It provides us with a life-sustaining ritual, a regular meeting around the word and person of Christ that can become the daily bread of our lives and our communities. How?
Monks have secrets worth knowing. One of these is that a community sustains itself not primarily through novelty, titillation, and high emotion but through rhythm and routine, namely, through simple, predictable, ritual processes. For example, a wise family will say to itself: “We will all be home at regular times, we will all eat together twice a day, and we will all be together in the living room at least once a day – even if it isn’t exciting, even if real feelings aren’t shared, even if some are bored, and even if some are protesting that this isn’t worthwhile. We will do this because, if we don’t, we will soon fall apart as a family. To stay together we need regular, straight-forward, predictable, daily rituals. We need the manna of daily presence to each other. Otherwise we’ll die.”
In the Eucharist, God sustains us in just this way.
Posted by David Nybakke at 3:39 PM