I have a wall in my study dedicated to icons and the above icon, The Holy Trinity by Rublev is one of my favorites. For me icons bring a sense of focus, stillness - an 'other' centeredness as they arouse an awe-inspiring abundance for life that lead into and carry me through prayers. So I was blown away with the following excerpt from Rowan Williams on holy images in his study on Dostoevsky, telling of their staying-power and dynamic nature that help us to fathom, at a new depth, what Jesus tells us in Matthew 12:6: that of the expansiveness of His Presence - that truly there is something greater here.


"So just as the authority of the divine Word has to establish itself, in and through the unceasing continuation of dialogue, as that which continually offers excess or abundance which may be healing, so the divine image establishes itself not by universally compelling attraction but by its endurance through disruption and defilement. 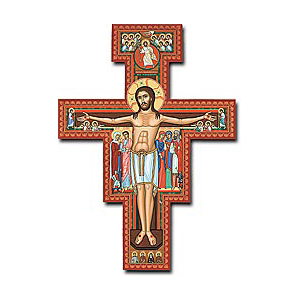 Fyodor Karamazov offers to spit on his wife’s beloved icon, as if the lack of any visible sanction or punishment that would prevent him doing this is a demonstration of the lack of “real presence” in the image, but he has failed to grasp the fundamental fact–to which all Dostoevsky’s stories of desecrated images point–that it is in the nature of images to be capable of desecration, and that what makes images sacred is not some magical invulnerability or supernatural protection but their capacity to retain in themselves the real energy of another world, transmitted into the world of isolated and death-bound agents. The icon is in this sense a “powerless” image, in that it is not safe from what history may do to it; the crucifixion of the fully incarnate image of God lets us know that. But a vulnerable image is not an empty one.

What comes into focus here ... is an offer and an invitation: it is an otherness that seeks itself in me, and enables me to seek myself in it... (t)he holy image ... is not an impenetrable surface repelling my identity, not a solid presence invading my weak and undefended territory, but a presence that offers to nourish and augment what I am."