Tough Gospel Reading Challenges Us in the Direction of Love 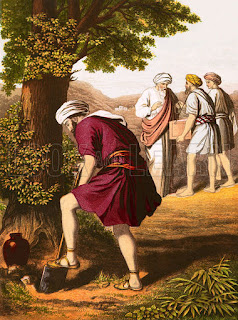 The parable of the talents in Matthew 25:14-30 is often heard as the master being harsh on the servant who is full of fear and resentment. In our journey of faith all of us are challenged to get out of the myth of an autonomous self stuck in the world-view and instead enter into Christ, linking us to Him, those who have gone before and those whose lives we are intertwined, enabling us to recognize our talents as "what has happened to us, the heritage granted to us by faith." The reality is when we try to operate out of fear or resentment we not only suffer, but the fruits "can even be harmful...," and as my friend Gil Bailie alludes, it is a recipe for squandering the gift of being and our talents, and we become like withering branches that are collected and thrown on the fire and burned (John 15:7).

The following appeared in The Magnificat - it is an editorial from Traces Magazine, (Communion & Liberation International) 2011.


In the painful confusion presently surrounding us, only a few things are clear and certain. One of these is that we cannot live on the proceeds of the past any longer. For example, we cannot base our tranquility on political balances consolidated decades ago; they are collapsing in the most unforeseeable way... It is no longer possible to assume that wealth automatically produces wealth - as was the case in the past fifty years in Western countries - without re-investing it now, and at a risk. Even lifetime certainties like home or relationships can be swept away in a moment, or end up caged in by a threat of death that suffocates the future...
So, as you find yourself looking at those dramatic events... you realize that the challenge reaches you at a deeper, radical level. For your wealth, too, cannot be enough, even that wealth that once served to lay a foundation on solid ground - an encounter, a history behind you, an education - in a word: the Christian heritage, what many of us would define, quite rightly, as the crucial factor of life, that which has given form to our existence. We can't live on the proceeds even of that. A faith reduced to heritage, to an inherited treasure, doesn't automatically generate interest and dividends sufficient for living now, for surviving the onslaught of reality today. It's rather like the parable of the talents... in which the owner is angry with his servant who buries his talent in the ground to keep it safe, instead of making it produce a profit.

The talents are... what has happened to us, the heritage granted to us by faith. If you don't risk it now, in time it is of no use. If there is not a presence that enables you to augment it and make it fruitful now, it is useless. It can even be harmful...

"The Christian faith stands or falls with the truth of the testimony that Christ is risen from the dead", as Benedict XVI reminds us... If you take this away, we are dead, because faith is reduced to "a series of interesting ideas" or "a kind of religious worldview", but it is "dead". All that's left is "our own judgement in selecting from his heritage what strikes us as helpful", and we find ourselves "left to ourselves", alone, unable to face up to the certainties that collapse, in a moment.


This is why Christ rose. He removes the stone from the grave, and he digs up the earth where we would like to hide what we have received, where at times we would have the temptation to bury the heritage of faith. He does it so as to give it back to us now, to make it bear fruit now, and to take away our loneliness from the world, for ever.
Posted by David Nybakke at 7:21 PM