St Clare of Assisi - "gaze upon, consider, contemplate, as you desire to imitate" 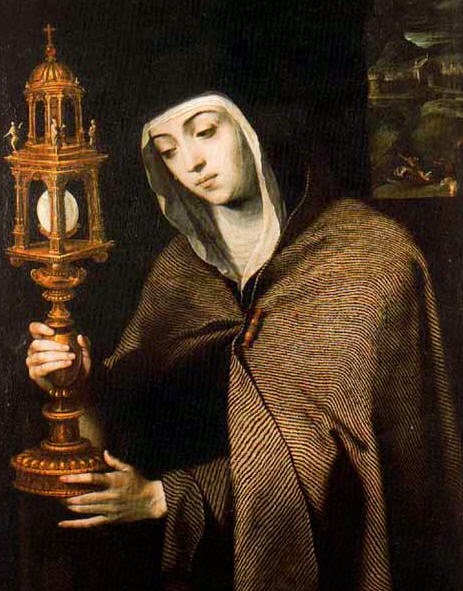 In one of the letters St Clare wrote to Lady Agnes of Prague:


"Look upon him who became contemptible for you, and follow him, making yourself contemptible in this world for him. Your Spouse, though more beautiful than the children of men, became for your salvation the lowest of men, was despised, struck, scourged untold times throughout his entire body, and then died amid the suffering of the cross.... Gaze upon him, consider him, contemplate him, as you desire to imitate him. If you suffer with him, you shall rejoice with him; if you die with him on the cross of tribulation, you shall possess heavenly mansions in the splendour of the saints, and in the Book of Life your name shall be called glorious among men" (2LAg 19-22).


If Catherine of Siena is the saintly woman full of passion for the Blood of Christ, the great St Teresa is the woman who goes from "mansion" to "mansion" to the threshold of the great King in the Interior Castle and Therese of the Child Jesus is the one who, in Gospel simplicity, travels the little way, Clare is the passionate lover of the poor, crucified Christ, with whom she wants to identify absolutely.

Check out this great film exploring the lives of St Clare and St Francis From Ignatius Press:


Produced under the sponsorship of the Franciscan Order, Clare and Francis was shot on location in Italy by Italian film company Lux Vide—the producers of Saint Rita, Pope John Paul II, and St. John Bosco. It is unique among films on Francis because of its historical accuracy and its authentic spirit of joy and piety that Francis was known for, as well as the major role played by Clare, who is given equal stature with Francis.

Clare (Mary Petruolo), the daughter of a patrician family, and Francis (Ettore Bassi), the son of a rich merchant, leave it all to follow Christ. Francis renounces his inheritance to live the Gospel in poverty. Clare reads deep into his heart and decides to follow him, leaving her home and family to give herself as the bride of Christ. Both found major religious orders and together they inspired many to follow their radical call to live the Gospel, and their impact has reached across the centuries to change the world. 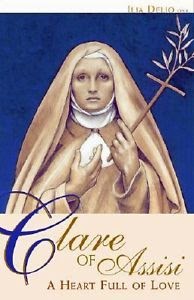 Sr Ilia Delio wrote a fabulous book Clare of Assisi: A Heart Full of Love,and as one reviewer wrote:


This tiny book is filled with words of wisdom about the first Franciscan woman, Clare of Assisi. In particular, it examines Clare's dedication to poverty as a way to live with and through Christ, and to achieve union with Him. Clare lived knowing that attachments to material possessions can stand in the way of Love and of the gospel life. Ilia Delio's book is filled with scholarship and intelligence, yet it gets to the heart the true meaning of this great saint's life: Clare is a model of a life lived only for Love of God. There are many sources for biographical sketches of Clare, but this book is deep and meaty in its examination of her spiritual legacy. It is a must-read for those desiring to understand Clare's understanding of the Franciscan way.


On this feast day of St Clare I would encourage all to explore one of these listed or any number of other great resources to enter into the profound spiritual ways of poverty, humility and joy - the essentials of the Franciscan life through the mirror of St Clare and St Francis.
Posted by David Nybakke at 3:41 PM