Living in and for the "SOMETHING GREATER" - St Bonaventure 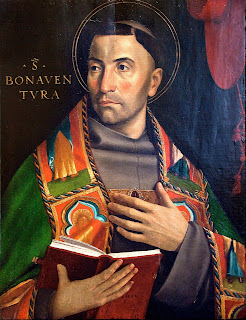 July 15th is the feast day of St Bonaventure, one of the pillars in the Franciscan Order. For St Bonaventure the ultimate destiny of the human being is to love God, to encounter him and to be united in His Love. For him this is the most satisfactory definition of our happiness.

“A specific emphasis he gave to his theology is explained on the basis of the Franciscan charism. The "Poverello" of Assisi, notwithstanding the intellectual debates of his time, had shown with his whole life the primacy of love. He was a living icon of Christ in love with Christ and thus he made the figure of the Lord present in his time — he did not convince his contemporaries with his words but rather with his life. In all St Bonaventure's works, precisely also his scientific works, his scholarly works, one sees and finds this Franciscan inspiration; in other words one notices that his thought starts with his encounter with the "Poverello" of Assisi.”

Throughout his writings he expressed this life inspired as a special gift of God and not attainable through some act of our own will. As the third pillar of the Franciscan Order (Francis and Clare being the other two) one finds the order more modest, more realistic, and yet always helping its members to come ever closer to revealing one's life as a living icon of Christ.


St Bonaventure goes further in his theology to express that this ascent towards living as an icon of Christ cannot be reached by reason only.  In the darkness of reason and intellect it is love that sees all. In all works of St Bonaventure one can marvel at his pointing toward something greater than mere words, as love goes beyond reason, it sees further, it enters more profoundly into God's mystery.


This morning at Mass at St Mary's Church, a Franciscan parish, Father Gregg read a brief excerpt from a favorite writing of mine:


The Journey of the Mind to God .


In this passing over,
if it is to be perfect,
all intellectual activities must be left behind
and the height of our affection
must be totally transferred and transformed into God.
This, however, is mystical and most secret,
which “no one knows except him who receives it” (Rv 2,17)

If you should ask how these things come about,
question grace, not instruction;
desire, not intellect;
the cry of prayer, not pursuit of study;
the Bridegroom, not the teacher;
God, not man;
darkness, not clarity;
not light, but the wholly fire
which inflames and carries you aloft to God
with fullest unction and burning affection.

This fire is God,
and the furnace of this fire leads to Jerusalem;
and Christ the man kindles it
in the fervor of His burning Passion,
which he alone truly perceives who says,
"My soul chooses hanging and my bones death" [Job, 7, 15].

He who chooses this death can see God because this is indubitably true:
"Man shall not see me and live" [Exod., 33, 20].

Let us then die and pass over into darkness;
let us impose silence
upon our cares, our desires, and our phantasms (imaginings).

Everywhere in Bonaventure’s writings one is invited to be awaken by the One Reality: that there is something greater than... (myself) here. Reason has to be conquered by revelation. Contemplation can not stop on the first or second level, where the rational soul attempts to make sense of the outer world and itself. The true and final contemplation is when the soul sees beyond the outer world and itself; when it ascends with the whole of creation above itself. There IS Something Greater than... (myself) Here!
Posted by David Nybakke at 3:26 PM