Interdividual - We Are A Colony of Others

Interdividual rather than individual best describes human beings and the word points to a term that we may be more familiar with, interconnectedness. 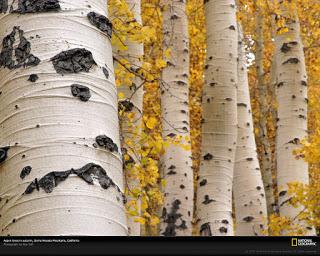 Let’s use the aspen tree for a glimpse into this idea of being interdividual. The leaves of an aspen have an unusual ability to twist and bend to protect the trees from severe winds. Their twisting motion helps the tree to dissipate the energy more uniformly throughout the forest canopy - to reduce the stress on the tree. Additionally, the quaking movement is thought to aid in the tree’s growth, because the constant movement increases the intake of air by the leaves. Lastly, moving the leaves increases the ability for sunlight to shine on the lower leaves, thereby improving the rate of photosynthesis for the trees (that is trees - plural)

But wait, perhaps we should say TREE (interdividaul).

Aspens are unique in that a forest of trees can be actually one tree. Aspens grow in large colonies derived from a single seedling and spread the roots to create new trees. The new saplings may appear as far as 30-40 meters from the parent tree, yet they are a part of the same system. The individual trees may live 40-150 years above the ground but the roots can live for thousands of years. There is one colony in Utah that is believed to be over 80,000 years old! Aspen colonies can even survive forest fires because their roots are so well protected. 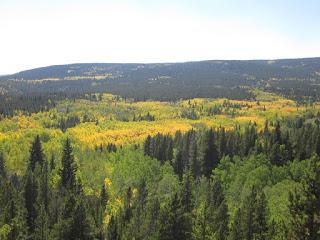 And because the colony is actually one system, they are quite generous to what could appear to be ”another tree”. If a tree on one side of the forest is thirsty, the trees will work in unison to pass water through the root system to the ailing tree from one that is in an area where water is more abundant. If another needs nutrients or minerals, again it will be passed through the root system from one tree to the one in need.

One of the most famous of quaking aspens' vast underground root systems is a network called Pando (Latin for "I spread", and also known as the Trembling Giant). It is estimated to cover about 107 acres, weighs about 6,600 tons and dates back 80,000 years - making it a contender to be one of the Earth's oldest and heaviest organisms. Trees within the root system grow and die, but these are replaced with fresh growth. The entire colonial organism, which is said to be derived from a single male plant, contains about 47,000 stems.

Interdividual is a term coined by René Girard and it means, in general that we desire according to the desire of the other and which is often referred to as “mimetic”. There has always been some other who precedes us and which surrounds us, and which moves us to desire, to want and to act. We may acknowledge this when we see it illustrated in the way the entertainment industry creates celebrities, or the advertising profession manages to make particular objects or brands desirable. Just observing yourself in the mob of consumers on Black Friday. 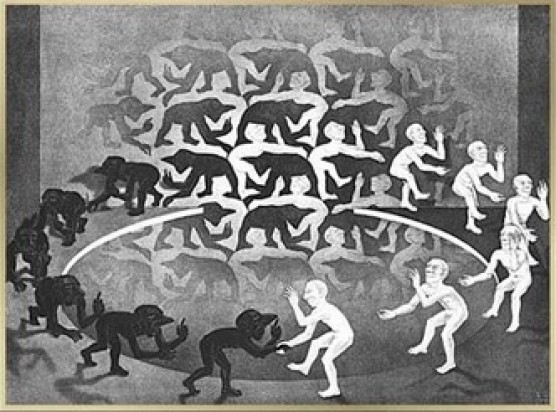 What becomes challenging for us is the claim that in fact it is not some of our desires that are highly mimetic, but the whole way in which we humans are structured by desire.

Girard has pointed out, much like the interconnectedness of the Aspen tree, that humans are those animals in which even basic biological instincts (which of course exist, and are not the same thing as desire) are ever-bond to the other. In fact, our capacity to receive and deal with our instincts is derived from a hugely developed capacity for imitation which sets our species apart from our nearest primate relatives.

As a result, gestures, language and memory are not only things which “we” learn, as though there were an “I” that was doing the learning. Rather it is the case that, through this body being imitatively drawn into the life of all those before us, gesture, language and memory form an “I” that is in fact one of the indications of the "social" other. Thus being highly malleable, it is not the “I” that has desires, it is desire that forms and sustains the “I”. The “I” is something like a snapshot, in time, of all the many relationships which preexist it and which it is a mirror image. 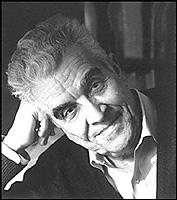 The image laid out here, of the person mimetic, is always reaching outward and inevitably getting caught in entanglements - physically, psychologically and every which way. As we twist and turn in our attempts to free ourselves from another, these very movements become highly contagious for others who often enjoin the swirling of estrangement until escalating into violence. The issue for restoring community is how do we break the spiraling cycle of violent contagion - bringing calm after the chaos? Instead of trying to break free from the other, thinking that is the way to become free, how do we, like the aspen tree, become part of the support system?

Not wanting to leave a post dangling, check out this link to an audio presentation The Scapegoat: René Girard's Anthropology of Violence and Religion.
Posted by David Nybakke at 3:40 PM