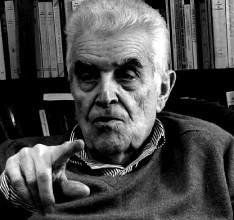 Bishop Barron has reviewed and written on René Girard numerous times click on this link, and here he provides a strong case for how Girard's thought came to shake the world of many, including myself. View 'Bishop Barron on René Girard' video at the bottom of the article.


René Girard, one of the most influential Catholic philosophers in the world, died last week at the age of 91. Born in Avignon and a member of the illustrious Academie Francaise, Girard nevertheless made his academic reputation in the United States, as a professor at Indiana University, Johns Hopkins University, and Stanford University.
There are some thinkers that offer intriguing ideas and proposals, and there is a tiny handful of thinkers that manage to shake your world. Girard was in this second camp. In a series of books and articles, written across several decades, he proposed a social theory of extraordinary explanatory power. Drawing inspiration from some of the greatest literary masters of the West—Dostoevsky, Shakespeare, Proust among others—Girard opined that desire is both mimetic and triangular. He meant that we rarely desire objects straightforwardly; rather, we desire them because others desire them: as we imitate (mimesis) another’s desire, we establish a triangulation between self, other, and object. If this sounds too rarefied, think of the manner in which practically all of advertising works: I come to want those gym shoes, not because of their intrinsic value, but because the hottest NBA star wants them. Now what mimetic desire leads to, almost inevitably, is conflict. If you want to see this dynamic in the concrete, watch what happens when toddler A imitates the desire of toddler B for the same toy, or when dictator A mimics the desire of dictator B for the same route of access to the sea.
The tension that arises from mimetic desire is dealt with through what Girard called the scapegoating mechanism. A society, large or small, that finds itself in conflict comes together through a common act of blaming an individual or group purportedly responsible for the conflict. So for instance, a group of people in a coffee klatch will speak in an anodyne way for a time, but in relatively short order, they will commence to gossip, and they will find, customarily, a real fellow feeling in the process. What they are accomplishing, on Girard’s reading, is a discharging of the tension of their mimetic rivalry onto a third party. The same dynamic obtains among intellectuals. When I was doing my post-graduate study, I heard the decidedly Girardian remark: “the only thing that two academics can agree upon is how poor the work of a third academic is!” Hitler was one of the shrewdest manipulators of the scapegoating mechanism. He brought the deeply divided German nation of the 1930’s together precisely by assigning the Jews as a scapegoat for the country’s economic, political, and cultural woes. Watch a video of one of the Nuremberg rallies of the mid-thirties to see the Girardian theory on vivid display.
Now precisely because this mechanism produces a kind of peace, however ersatz and unstable, it has been revered by the great mythologies and religions of the world and interpreted as something that God or the gods smile upon. Perhaps the most ingenious aspect of Girard’s theorizing is his identification of this tendency. In the founding myths of most societies, we find some act of primal violence that actually establishes the order of the community, and in the rituals of those societies, we discover a repeated acting out of the original scapegoating. For a literary presentation of this ritualization of society-creating violence, look no further than Shirley Jackson’s masterpiece “The Lottery.”
The main features of this theory were in place when Girard turned for the first time in a serious way to the Christian Scriptures. What he found astonished him and changed his life. He discovered that the Bible knew all about mimetic desire and scapegoating violence but it also contained something altogether new, namely, the de-sacralizing of the process that is revered in all of the myths and religions of the world. The crucifixion of Jesus is a classic instance of the old pattern. It is utterly consistent with the Girardian theory that Caiaphas, the leading religious figure of the time, could say to his colleagues, “Is it not better for you that one man should die for the people than for the whole nation to perish?” In any other religious context, this sort of rationalization would be valorized. But in the resurrection of Jesus from the dead, this stunning truth is revealed: God is not on the side of the scapegoaters but rather on the side of the scapegoated victim. The true God in fact does not sanction a community created through violence; rather, he sanctions what Jesus called the Kingdom of God, a society grounded in forgiveness, love, and identification with the victim. Once Girard saw this pattern, he found it everywhere in the Gospels and in Christian literature. For a particularly clear example of the unveiling process, take a hard look at the story of the woman caught in adultery.
In the second half of the twentieth century, academics tended to characterize Christianity—if they took it seriously at all—as one more iteration of the mythic story that can be found in practically every culture. From the Epic of Gilgamesh to Star Wars, the “mono-myth,” to use Joseph Campbell’s formula, is told over and again. What Girard saw was that this tired theorizing has it precisely wrong. In point of fact, Christianity is the revelation (the unveiling) of what the myths want to veil; it is the deconstruction of the mono-myth, not a reiteration of it—which is exactly why so many within academe want to domesticate and de-fang it.
The recovery of Christianity as revelation, as an unmasking of what all the other religions are saying, is René Girard’s permanent and unsettling contribution.

Posted by David Nybakke at 2:43 PM