Where Violence is Born - David Cayley's 2 series on René Girard 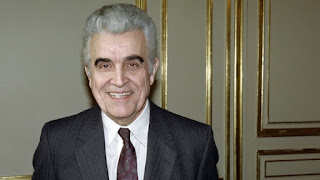 In Part One of David Cayley's series, The Ideas of René Girard he says: "According to French thinker René Girard, human beings copy each other's desires and are in perpetual conflict with one another over the objects of our desire. In early human communities, this conflict created a permanent threat of violence and forced our ancestors to find a way to unify themselves. They chose a victim, a scapegoat against whom the community could unite. Biblical religion, according to Girard, has attempted to overcome this historic plight. From the unjust murder of Abel by his brother Cain to the crucifixion of Christ, the Bible reveals the innocence of the victim. It is on this revelation that modern society unquietly rests."
Listen to the podcasts below:
Part One
Part Two

"Girard has demonstrated how the Gospel has definitively unveiled the Scapegoat Mechanism - the sacrificial system on which human society has been based. A system which demands the sacrifice of innocent victims. Now that it has been demystified, however, it has lost its ability to control human violence. This now presents humanity with a stark choice: either perish through increasingly uncontrollable violence or build a society based on love."

Program 1: Violence in Human Societies and How Religion Controls Violence Through Sacrifice.


The Scapegoat: René Girard's Anthropology of Violence and Religion

Program 2: The Breakdown of Sacrifice in the Ancient World and the Emergence of a New Approach to Social Order in the Hebrew Bible

Program 3: The Gospel as an Intellectual Breakthrough in Human Culture The Definitive Revelation of the Scapegoat Mechanism.


Program 4: The Innocence of the Victim: The Hidden Spell of Satan in the Scapegoat Mechanism Broken

Program 5: Christianity: The Invisible Foundation of the Modern World A Christian Response to the Enlightenment, Nietzsche and Modern 'Political Correctness'

Posted by David Nybakke at 4:29 PM